Any horror fan out there can attest to the staples of the late-70’s early 80’s tenants of horror. Be it the slow sprawl loaf of Michael Meyers in Carpenter’s 78′ original Halloween or the supreme gore that was Tobe Hooper’s Texas Chainsaw Massacre revered to the point that it’s inspired seven subsequent sequels and reboots, we can all agree that there’s an indistinguishable feel and atmosphere that made the golden age of horror such a spectacle–and an alluring one at that.

The “classic” horror movie is a slow burn. It’s the build-up alongside nuanced development that rises to some tumultuous and over-revealing climax, harnessing elements we as a society fear. It’s panic, dread, alarm, and outrage at events and instances well-outside the norm, and it’s glorious.

However, it’s clear with the critically-outstanding reception of David Robert Mitchell’s 2015 It Follows that the horror industry is in the midst of creative deadlock–a stalemate that needs more than the regurgitation of classic horror tropes for salvation.

The story is about Jay Height (Maika Monroe), as she contracts the dangers associated with “It” following her. What’s “it”? “It” is a slow-walking manifestation of some sort of supernatural force whose only purpose is to destroy its victim. “It” manifests itself throughout the film as a number of individuals all of which slowly walk in pursuit, deranged in their lope, and comical in their speed.

I can’t knock the film entirely. Where Mitchell’s concept strikes a chord is the fact that “It” is literally everything and appears slowly and surely. It encompasses a sort of universality and omnipotent appeal to the fact deep down we’re all scared of being chased–regardless of however slow said chase might be.

That being said, the story moves with the rapidity of its villains (that is to say, not at all). Jay’s fears of “It” although slightly spooky when it actually surfaces and shows its face, is about as terrifying as a barking dog revealed as a maltese.

Everything from the pace of the film to the sonorous synth lines that pierce and strike in calculated intervals throughout the picture’s entirety seems to be lifted from the world of the 80’s horror classics. The synths evoke Barker’s 1987 Hellraiser in their orchestrated cacophony, and the shots are grandiose and sweeping a la Kubrick’s (love it or hate it) 1980 The Shining.

Getting to the point, I’m tired of rehashed clichés and thematic tropes being recycled year after year. It seems as though the latest horror resurgence is nothing more than the recycled surety of directors who were once original.

It’s not the film that disappointed me so much as its reviews. It seems as though between the ivory-tower that has become the Cannes festival panels, Rolling Stone, and mainstream audiences everywhere It Follows is believed it to be some smash-hit original–groundbreaking in its inception and cinematographic brilliance.

On closer inspection–beneath the “originality” that critics praised so dutifully are the tenants of a genre long-since out to pasture. My only hope is that someone manages to bring it back. 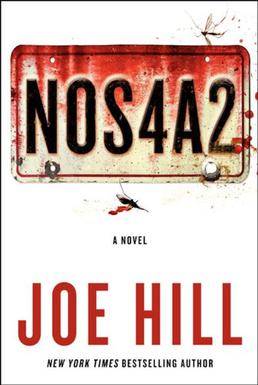 I understand I’ve leaned more towards the horror story lately, and that to limit myself to a single genre is not only intellectually isolating, but isolating for my readers as well.

Unfortunately for those afraid of the classic horror story out there, I’m here to disappoint you yet again. Thus, I bring you Joe Hill’s NOS4A2.

A not so secret, secret: Joe Hill is Stephen King’s son.

Boom! And, not so surprisingly, this is a fact that Hill is relatively keen on keeping under-wraps. His book jackets and bios mention nothing of the novelistic powerhouse that is King. No bad blood there, just a man trying to make it without having to pull himself out from under the shadow of one of fiction’s greatest writers. No shame there.

What Hill has managed to turn out with NOS4A2 is nothing short of amazing. His fiction is reminiscent of King’s in its easy-going bravado. Hill writes like a pro and takes smart shots as they come to him, much like his father. And yet Hill’s work is somehow easier. There’s a lighter sense of unconcern for a tightly-wound plot (that’s not to say his plots are not tightly-wound, because believe me, they are), in lieu of a downright fun story.

NOS4A2 is the story of supernatural “inscapes,” and what amounts to personal reflections manifested physically in our world. What follows is an amazingly fast paced juggernaut of a horror story about vampiric child-killer extraordinaire Charles Manx as he meets a force that just might be too much to handle in wayward mother-figure Vic McQueen.

With expectedly depraved characters, oftentimes gratuitously violent and perverse scenes, and King-esque tongue-in-cheeky turns of phrases (“Ear today, gone tomorrow”…I’ll let you take a guess about that one) Hill takes us on a terrifying trip to Christmasland and the world of Manx.

But it’s not just a powerhouse of a plot that gets this one going. Hill appeals to the avid bibliophile with references to Frobisher’s “Cloud Atlas Sextet” and “De Zoet” (Mitchell’s Cloud Atlas and A Thousand Autumns of Jacob De Zoet) and even his father’s work with the “True Knot” (Doctor Sleep) with references and Easter Eggs that are as entertaining to pick out and devour as the book’s plot.

This is candy. If you’re looking for something intellectually stimulating like Faulkner or Maupassant, you might as well toddle off, because you’ll be grossly disappointed with NOS4A2. but for those in need of a quick-paced thriller, this is for you.

Close the windows and lock the doors for this tour-de-force of scary dreams and horrific slaying in Christmasland. Or, if you’re like me, let the summer-night breeze in to freeze the blood with this frighteningly original screamer.

First and foremost, Stephen King’s It is a book that commands respect. Its girth alone merits a level of deference and admiration that other books do not. Weighing in at just under 1100 pages, It is an opus of genre horror and a masterpiece of storytelling.

Before I continue, I’ll dispel some preconceptions about this wonderful book. It is not just about a killer clown. Although that is a recurring character (because of how awesome Pennywise is in the first place) it’s not the entirety of the story. There’s more.

It‘s the tale of seven friends, a timeless malevolent entity, a backwoods northeastern town, love, lust, murder, marriage, really (and this is a total cop-out, but bear with me) everything. Stephen King’s It is a tome that covers the hostilities of what it’s like to grow up in a place where the bullies are iniquitous and criminal, and what lurks beneath the pavement is even worse. Keep close to your friends and allies because there’s danger out there.

From giant spiders, killer clowns, werewolves, evil birds, even terrifying elderly neighbors, King perceptively and deliberately plays off any and every childhood phobia making this novel not just a sensational narrative, but a play on the alarms and consternations of a people entranced by the barbarity and savagery of the human race.

Really, I can’t suggest this book enough. Don’t be a baby, and read It.