This is for all the poets out there. Go read Rumi.

A 13th century Persian poet, Islamic scholar, and theologian, Jalāl ad-Dīn Muhammad Rūmī, now simply known as Rumi, might just be what our society needs more than anything.

I had the pleasure of reading his work while traveling through the Turkish interior and I couldn’t have been happier with the pairing of local poetry and countryside. It’s not as though his work references specific landmarks or geographical features, but what it does do is capture the spirit of a people known for their revelation of the human spirit, which Rumi does in every verse.

His message and language is simple. Love each other and ironically be empty. initially paradoxical, it’s a refreshing message for the American stuffed to the gills with nearly everything. As a society we seem to have reached the pinnacle of indulgence. Between the Ashley-Madison scandal and Donald Trump self-righteously screaming for excess in the face of American politics it seems as though we could all use a nice reminder of the fact that emptiness is a feeling in and of itself and it’s not necessarily a bad one.

Though Rumi calls more for a metaphorical emptiness–that it is in our state of true abstinence and withdrawal/restraint from the pleasures of this world where we’re able to allow our own bodies to take on the glorious ethereal qualities of beyond–ultimately so we can slowly allow our minds to drift upwards to God and seek something more than satiety.

The message is a good one, and the poetry that presents the message is some of the most strikingly poignant and beautiful available. Drunken revelry and night-time spectacle. Ecstatic dervish-whirled frenzy and the elevation of the spirit are only some of the highlights that grace his poetry.

For the aesthete in need of a shock to the soul, go out and pick up Rumi.

Most would probably consider me a lit. snob. One of those who turns his nose up at mainstream fiction, and to some extent that’s true. I prefer the more linguistically difficult and denser tomes. I just think reading the tougher stuff benefits us in ways that the easier to read texts do not. Either way, I’ll toss in some candy here and there for fun, and this one is absolutely that: pure fun.

Brown to me is hysterical. It’s melodrama to the point of frenzy. His books move at the speed of light and his characters are awesomely cliché and predictable. Every woman is a super-model who speaks a dozen languages and holds three master’s degrees, and every man (with the exception of the vacuous Robert Langdon) is some sort of superhuman athlete. The villains are all tattooed and smoke, and the ancillary characters are forgettable to the point of non-existence.

Melodrama aside, I love Dan Brown as much as anything else out there. I’m not reading him for self-betterment. If I want to improve I’ll pick up Proust. If I want to lose myself to some over-the-top plot-gripper, I’ll head to Brown’s camp.

You don’t need any knowledge of The Divine Comedy itself to grasp this one, but it’s interesting to know some of the references Langdon tosses around like some sort of profound homage to the classics.

It’s a torrential romp through Florence and Istanbul motivated towards stopping some global plague from escaping the hands of a populace-controlling maniac. Needless to say, it’s awesome. Fast and fun. The perfect beach read to override that squawk of seagulls. Look no further for an escape. This one’ll suffice.

Originally published in Paris in 1955 , Nabokov’s opus toward illicit, unrequited love via Lolita is a perversely fascinating linguistic masterpiece.

Meet Humbert Humbert. A late 30’s literature professor who falls head over heels in love with twelve year old Dolores Haze (a.k.a. Lolita–his personal nickname for her). And, through a disturbing series of events, witness as Humbert slowly inserts himself into her life as official “stepfather,” resulting in one of the most twisted love stories ever told.

Listed in Time Magazine’s Top 100 novels of All Time, Lolita stands as one of the most controversial novels to have ever been published.

As an avid and long-time Nabokov fan, I cannot recommend this one enough. 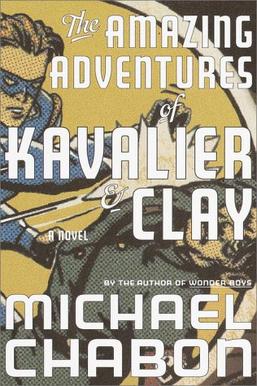 Michael Chabon’s 2001 Pulitzer Prize winning novel The Amazing Adventures of Kavalier and Clay is one of the most strikingly original and entertaining reads out there.

Set in mid-war 1940’s New York and spanning several decades, generations, and lives, Chabon cleverly recreates the 1950’s comic book industry boom through the rise of the “Escapist” and his harrowing adventures amidst the turmoil of a city reeling from the effects of global warfare.

Don’t miss this brilliant pulitzer prize winner–it’s one of a kind.

Thomas McGuane’s second novel, originally published in 1971 to critical reviews, is a hysterical commentary on the state of the American psyche seen through the eyes and lived through the misadventures of wayward entrepreneur Nicholas Payne.

Follow Payne as he pursues the hand of a doughty millionairess and joins sides with a double amputee con-man (the bionic man!) as they attempt to sell glow-in-the-dark bats that will rid entire towns of mosquitos overnight (or so they say).

One of the most uniquely funny and linguistically savvy voices in American Letters, The Bushwhacked Piano is the perfect balance of literary panache and buoyantly side-splitting hilarity.

It’s time to open up those windows and breathe in the glorious scent of freshly cut grass. It’s summer, and with the sweltering heat comes leisure time galore (if you’re me, and have summers off), and the prospect of books, books, and more books.

A tome of info on India, Shantaram is the story of Mr. Lindsay and his post-prison-break refuge in Bombay. He falls in with the Indian mafia, revels in slum-life, and explores the sights and sounds of a country known for it’s mellifluous and mirthful spirit.

Our Man in Havana – Graham Greene

Greene’s 1958 Cuban spy-parody is a comic romp through the eyes of vacuum cleaner salesman James Wormold as he’s accidentally thrust into the world of top-secret MI-6 espionage during the Cuban Missile Crisis. Certainly, one of Greene’s more uncharacteristically hilarious novels, it’s without question the light-heartedly perfect pool-side read.

Discovered in manuscript form amidst the wreckage of the car accident that prematurely took Camus’ life, The First man is a departure from his more intellectually weighty works. It’s the story of childhood, sun, sea, and the life of a small boy growing up amidst the turmoil of French colonized Algeria. The perfect read for the isolatory deep-thinker.

The story of Ray Smith (Kerouac) and Japhy Ryder (Gary Snyder) as they explore the duality between aesthetics and buddhism, and how all ultimately converge with nature. Experience the free-wheeling world of youthful late night wine-drinking parties combined with the serenity that comes with supreme mountaintop isolation in this beautiful summer read.

Nothing spells summer like a good Hemingway story. Thus, why not read them all? From the bullfights in Pamplona to African safari mishaps, this essential collection is a perfect portrayal of a man who reached near-mythic status in his literary career. Far more accessible than one would think, The Complete Stories is the perfect beach companion for the serious literarist.

Note: these are my personal favorites, though I would be remiss not to include the glorious pleasure-filled reads of summer like Harry Potter, Stephen King’s It, and Dan Simmons’ Summer of Night, all of which come together as some of the best summer reads out there.

Safran Foer’s multi-facted prose is unlike anything else out there (except maybe House of Leaves—but that’s a different story altogether).

Utilizing an array of textual devices ranging from the pictographic imagery of words as pictures (no clue what to call that one) and a stunning collection of photographs meant to draw the reader through the story itself–Safran Foer manages to create a story that is both gut-wrenching and timelessly unique.

Foer is a master in conveying the truth that at the essence of language is humanity–that we are stories, and our stories are nothing more than extensions of ourselves. Yes–this book covers that in gorgeous detail…

Forget the film, and go read the book. One of the best to have been published in the last decade and something entirely original in and of itself.

It’s a book about a book about a movie. So yeah, wrap your head around that for a second while I synopsize the plot. The initial layer of the chimerical novel follows tattoo artist Johnny as he sifts through a chest of writing collected by the half-mad and reclusive Zampanò.

The tertiary layers deal with Zampanò’s writing: a chronicle of the life of the Navidson family who moves into a home that they soon discover is larger on the inside than it is on the outside.

What follows is a brilliantly captivating tale of exploration, madness, psychological intrigue and and terror. It’s wonderful.

The text itself is another masterful matter altogether: the book is written to mirror the content of the story itself. Danielewski’s textual layout is nothing short of astounding as the writing bends, turns, misleads, and misconstrues information much like the elusive and ever-expanding interior of the Navidson’s home. This is not a light read. The interior of the book is deliberately confusing oftentimes including references to appendices that don’t exist, and footnotes that lead nowhere.

Be that as it may, the book is a wonderfully constructed masterpiece. I cannot recommend this one enough.

David Mitchell’s Black Swan Green is the story of 13 year old budding-poet-in-hiding Jason Taylor, and the struggles he undergoes between 1982-1983.

The book is set in the English countryside and follows Taylor as he experiences the frustrations and hostilities that young boys are known to inflict upon one another during adolescence. By far Mitchell’s most accessible work, though still relatively complex in its own right, Black Swan Green is a beautiful story of friendship, love, loss, and what it takes to overcome the chaos of life.

Part Stephen Daedalus, part Holden Caulfield, Jason Taylor is the voice of a new crop of adolescents attempting to steady themselves amidst the bedlam that is existence.

For those vying for that relatable piece of literature to take them pleasantly into summer, look no further–Black Swan Green is it.

As a long time Murakami fan, I can’t recommend this one enough.

It’s the story of adolescence and self-realization told by one of our generation’s greatest story-tellers. In this 2005 release Murakami deftly interweaves the tale of 15 year old Kafka who runs away from home only to find himself caught up in a warped sort of Oedipal journey toward self-discovery. The other side deals with lost-cat-finder Nakata who has the uncanny ability to speak to cats.

The two navigate the streets of contemporary Japanese society amongst the likes of talking cats, irate social spirits and peculiar pop-culture icons.

At the heart of this book is Murakami’s characteristic sense of isolation and alienation from a society that surreal in its familiarity.

If you haven’t read Murakami yet, now is the time to start. Kafka on the Shore has it all.